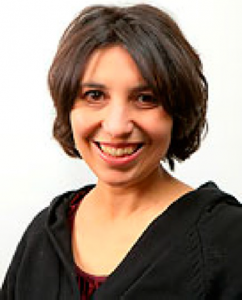 A native of Uruguay, Valeria Grazú received her Ph.D. in Science from Autonomous University of Madrid in 2006. She was a postdoctoral fellow at the Aragon Institute of Nanoscience (INA) from 2006 to 2013, joining the Nanotechnology and Apoptosis Group in 2007. From 2013 to 2015 she held the position of Research & Development Director at Nanoimmunotech S.L. In 2015 she was granted a Ramón y Cajal fellowship at the University of Zaragoza.

Research interests: development of novel mono/multifunctionalization strategies for nanomaterials with different biomolecules (enzymes, peptides, antibodies, carbohydrates, and so forth) for their use in diagnosis and therapy.